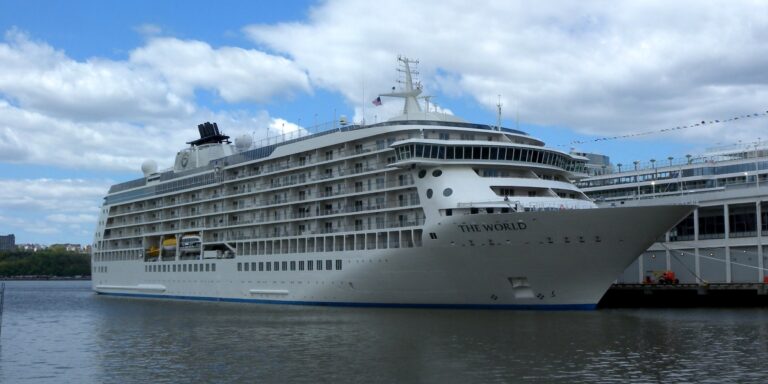 Making your home on the high seas

Back in 2006, my wife and I were living in San Francisco and bristling at the rapidly increasing rents (yes, even that long ago). We noticed the prices for homes in our neighborhood (much like the one we were renting) and couldn’t fathom ever being able to afford a mortgage for a tiny house in an unfashionable neighborhood of the city. Needless to say, that situation has gotten far, far worse in the intervening years. We do own a house now, but it’s a very small one, and nowhere near San Francisco. When looking for a home, we toyed with the idea of buying a condo instead, but even though they might cost a bit less, you pay monthly fees for maintenance of the building and common areas; yet you get less privacy and have less flexibility in how you can use or modify the space.

On the other hand, we love to travel, so I was intrigued by a notion that was all the rage in the mid-2000s: selling cruise ship cabins as condos. Roughly speaking, the sales pitch was that for just a bit more money than you’d pay for a luxury condo, you could travel the world in style without leaving home—or spending extra on airfare and hotel accommodations. In other words, if you were thinking about buying a condo anyway, if you like to travel, and if your work and lifestyle didn’t tie you to a particular location, you could have your cake and eat it too.

I speak about this in the past tense even though it’s technically still possible. But as I’ll explain in a moment, changing market conditions have largely taken the wind out of this idea’s sails.

Living full-time in a cabin on a cruise ship isn’t quite as simple as buying an expensive condo. For one thing, your average working middle-class couple—an ideal target market for a conventional condo—might run into difficulties living on a ship beyond merely paying for it. Most jobs require employees to show up at a particular location, for instance, and a ship could be highly problematic if you’ve got school-aged children, as we do. So retirees and the excessively rich are among those most likely to purchase a condo on a ship. On the other hand, living aboard a ship for a month or two at a time is well within the means of many ordinary, working citizens, and in some cases one can buy fractional ownership of a cabin—very much like a timeshare. Even those who purchase a cabin outright generally maintain land-based homes as well, and spend only a few months of the year on the ship.

When I say “cabin,” by the way, don’t think I’m talking about an ordinary ship’s cabin—as in a smaller and less comfortable hotel room. On the contrary, the homes you can buy on a ship range from simple studios to expansive suites with three bedrooms, sweeping verandahs, and every conceivable amenity. Most units have kitchens, though of course you’ll be somewhat limited in where you can shop for groceries. But naturally each ship has numerous restaurants as well, so you needn’t do your own cooking at all.

As just one of 200 or so owners, you’ll have little if any influence over the ship’s itinerary. But you can be assured that, over the course of two or three years, your home will visit nearly every major port on the planet. Some residential ships make a point of being in Cannes for the annual film festival, in Rio for Carnivale, or in other seasonally appropriate locations. But between ports, tenants may find the range of activities onboard a bit limiting; these ships have fewer shops, shows, and other diversions than vessels of similar size that cater to vacationing tourists. In addition, you’re bound to miss certain conveniences of home, such as a choice of medical and dental facilities, your favorite local businesses, and the proximity of friends and family. On the other hand, you won’t need a car, and you can hardly offer a more attractive vacation getaway for visiting guests.

The first residential cruise ship to set said is called The World, and it launched from Norway in 2002. Although no prices are currently listed—the cabins are presumably all sold, though occasional turnover is inevitable—the last time I checked, prices ranged from US$825,000 to $7 million, plus a 6% annual fee to cover maintenance, utilities, landing privileges on the ship’s helipad, and so forth. Some units could also be rented for anywhere from $1,200 to $4,200 per night. The ship features the usual luxuries, such as a casino, a theater, upscale restaurants, and a spa. Unlike ordinary cruise ships, The World typically spends two to five days in each port, giving tenants plenty of time to explore the world off the ship. The itinerary changes each year.

Another cruise vessel currently selling units (though it isn’t scheduled to launch until mid-2020) is the MV Narrative, which advertises prices “from only $352,235.” That’s for a 172-square-foot (16 m2) cabin on a lower deck—not including the $70-per-person-per-day maintenance fee. If you want a large cabin on an upper deck, you’ll be looking at spending upwards of $3 million dollars, plus $200 or more per day, per person. This ship seems to offer everything, including t’ai chi classes. Hmmmm. I wonder if they’ve lined up an instructor yet. I know a guy.

At least two more such cruise ships are also reportedly in the works—The Utopia (still at least a couple of years out) and The Marquette, which is unique in being a river cruise ship rather than an ocean liner; the plan is for it to travel the inland waterways of the eastern United States.

However, I have to wonder how safe an investment something like this is. When I first wrote here about cruise ship condos in 2006, at least three other major vessels were in various stages of preparation, and all those projects were apparently cancelled—the websites have been taken down, and I’ve found no evidence that they ever set sail. Those were The Four Seasons (a ship owned by and named after the hotel chain), which was supposed to launch in the fall of 2007; The Orphalese, which was supposed to set sail in 2008; and The Magellan (which hadn’t even begun construction at the time but was already selling condos)—that one appealed to me especially because it promised an observatory with an astronomer on staff. Maybe they would have succeeded had enough people gotten on board with the idea, early enough, but…I guess that ship has sailed.

Because I’ll probably never have the sort of money that would make owning a cruise ship condo even a remote possibility, I can’t say whether it would be worth the expense. In some respects, you undoubtedly get what you pay for, but then, I don’t really want or need to be surrounded with luxury all the time. If someone came up with a middle-class condo ship that a mere mortal such as myself could afford, though, I’d certainly consider taking my home with me as I travel the globe.

Note: This is an updated version of an article that originally appeared on Interesting Thing of the Day on June 30, 2006.