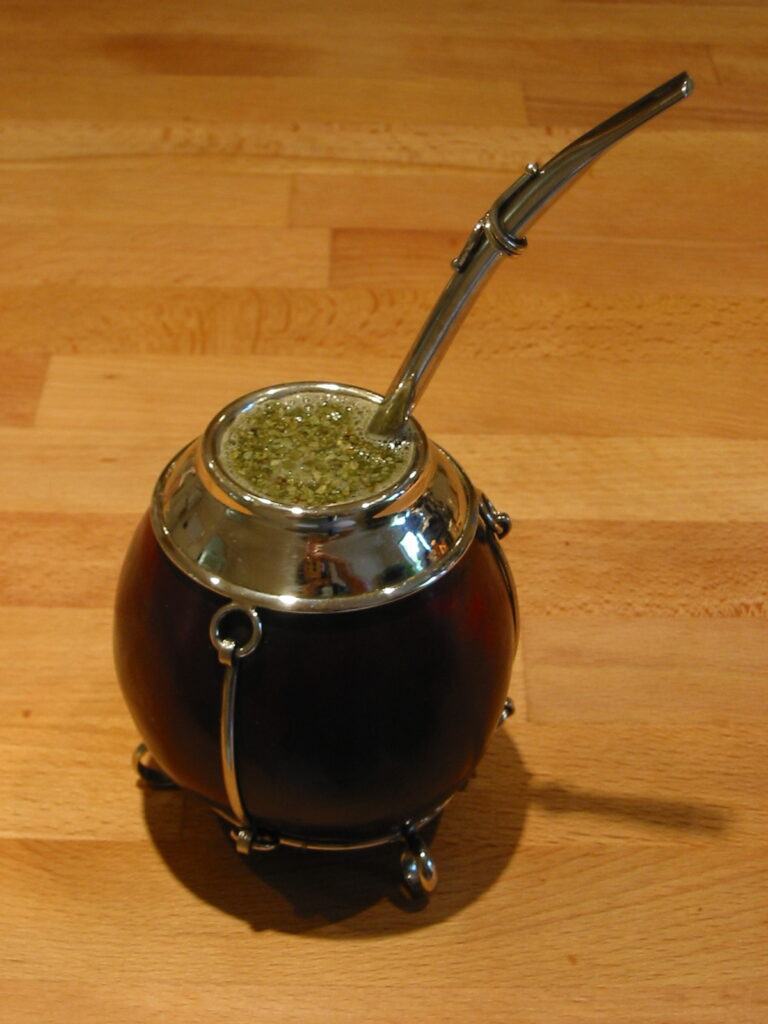 The national beverage of Argentina

I’m a coffee person. I wouldn’t say I’m addicted to it, but I do certainly enjoy drinking it on a more or less daily basis. Sometimes two or three times a day. In fact, now that I think about it, I could use a cup right now. Excuse me. (Time passes.) Ah, that’s better. I do not drink coffee for my health, although I am aware of studies suggesting that coffee consumption in moderation may reduce the risk of colon cancer, kidney stones, heart disease, and even Parkinson’s Disease. But I certainly appreciate the caffeine, the aroma, and the soothing effect of a warm beverage sliding across my tongue and down my esophagus.

Many of my friends, however, are tea people. I have nothing against a nice cup of tea now and then, and of course tea ably fills that hot beverage need. But in terms of aroma and both psychological and physiological impact, tea just doesn’t do it for me. Once again, tea’s supposed health benefits—of which there are, I admit, far more than those of coffee—don’t quite tip the scales. Maybe I’d be 5% healthier if I switched from coffee to tea, but then, maybe I’d also be 10% grouchier.

A Drink to Die For

I am always, however, happy to try new and unusual hot beverages, especially if they are reputed to have health benefits, a strong aroma, and a flavor frequently referred to as an “acquired taste.” And even more so if the beverage must be prepared and served in a highly ritualized way using special, single-purpose gadgets. So on a trip to Argentina in 2004, I was enthusiastic about sampling mate, their national beverage—and acquiring the necessary paraphernalia to make it myself.

Now, keep in mind: back then, mate wasn’t really a thing in the United States. This was long before every supermarket, convenience store, and cafe in North America hopped on the yerba mate bandwagon, with all manner of hot and cold drinks based on this plant. But even if you’ve sampled something called mate, if you didn’t do it in Argentina, I’ll bet you didn’t do it the “right” way (as defined by Argentineans).

According to one survey, mate (pronounced “MAH-teh”—and not to be confused with the Spanish word maté, which means “I killed”) is regularly consumed by some 92% of Argentineans—and by similarly large numbers of people in Uruguay, Paraguay, and Brazil. Superficially it appears to be a kind of tea, but appearances are deceiving. The true story is much more complex.

For starters, there’s the nomenclature. The dried leaves that are brewed to make mate are known as yerba mate—the word yerba meaning “herb.” This is, however, a misnomer: the leaves come from an evergreen tree in the holly family, Ilex paraguariensis. The word mate itself comes from the Quechua word matí, which refers to a certain type of gourd (Lagenaria vulgaris) which, when dried and hollowed, is used as the serving vessel for the beverage. So depending on context, mate can mean the leaves, the container, or the infusion of the leaves in water. The latter sense appears to be the most common—and is thus at odds with the typical North American usage of “yerba mate” to refer to that infusion.

Yerba mate plants must be carefully cultivated and their leaves harvested at just the right time. The leaves are briefly roasted to preserve their color and prevent spoilage, then dried thoroughly, coarsely ground, and left to age for nine months. Finally, they are crushed and packaged. One supermarket we visited in Patagonia had an entire aisle of mate—dozens of varieties, textures, blends, and package sizes. But even the highest-quality brands were inexpensive: a few dollars or so for a kilogram.

The gourds come in every conceivable shape, size, and color, usually with a three-legged metal base (to prevent tipping, since the bottom is convex), and often with a metal ring around the hole in the top, to reduce wear. Although actual gourds are most common, we also saw mate pots made out of clay, ceramic, metal, and even cows’ hooves and horns. Each gourd also requires a special accessory called a bombilla—basically a metal straw with a strainer at the bottom. Instead of filtering out the tiny leaf fragments when the beverage is brewed, drinkers use the bombilla to filter it as they sip.

To prepare mate, one must begin with a properly “cured” gourd—one that has been soaked or cleaned in one of several ways to remove the residual oils that could adversely affect the flavor. The gourd is then filled about two-thirds full of yerba mate leaves, shaken, and tipped at an angle. A small amount of hot water is poured into the empty side, and after a couple of minutes, the bombilla is inserted and a larger quantity of hot water added. Each of the numerous books and websites I read that described mate preparation had different instructions for the precise method of creating an ideal mate—and in fact, many people prefer to leave this immensely important and challenging task to a cebador, a local expert in mate preparation. Every source I consulted, however, was in agreement that unlike tea, mate must never be made with boiling water.

Mate has the somewhat bitter taste of tannins, much like tea. Because of the ratio of leaves to water, it is a very strong flavor. Some of my companions likened it to “grass,” “hay,” or “alfalfa.” I believe these descriptions were intended to be uncomplimentary. I felt about the taste the way I felt about coffee the first time: kind of bitter, not immediately appealing, but I’ll bet it could grow on me.

Mate is normally shared among several people. I read in two different books that each person customarily takes a sip or two from the bombilla, passes the mate to the next person, and the cycle continues. When the liquid gets low, more hot water is added. However, a reader from Buenos Aires informed me that the custom as he knows it is for each person to finish the amount of water in the gourd and pass it back to the cebador, who then refills it and passes it to the next person.

In any case, because such a large quantity of leaves is used, it takes a long time for a single dose of mate to lose its flavor. The people we observed drinking mate appeared to be unconcerned about sharing germs. Apparently in some situations individual, disposable bombillas are used—but more for convenience than hygiene. Our guide did tell us, though, that according to legend when companions share a mate, they will also share their dreams. I did not check to see what other members of our group dreamed about the night after we shared our first mate, but it makes a nice story in any case.

Purists drink their mate hot and unsweetened—just the way I like my coffee. But I read repeatedly that some segments of the population, such as women, children, and city dwellers (if you can believe such categories) prefer their mate cold and/or sweetened with sugar—and sometimes even prepared with milk. We observed locals drinking mate at all hours—in fact, pretty much constantly throughout the day—except with meals. The quantity typically ingested in a day puts my considerable coffee consumption to shame. In order to be assured of a ready supply of raw materials, some people carry around leather cases large enough to hold a gourd, a thermos full of hot water, and a large bag of yerba mate.

Mate is a mild stimulant—when brewed, it has about half as much caffeine as coffee. Some people believe that unlike coffee, mate’s stimulant effect disappears very quickly when you stop drinking, so it can be consumed safely at bedtime. Mate supposedly functions as a digestive aid, which seems reasonable enough; it’s also used as a laxative. Other health claims abound: mate is said to curb the appetite, boost immunity, combat the effects of aging, and even return gray hair to its original shade—among many other benefits. How many of these effects are genuine, I can’t say. But I suspect its health benefits handily beat those of coffee.

Argentineans who drink mate all day long take it very seriously—they must have just the right brand, prepared just the right way in just the right gourd. And of course, “just right” differs enormously from person to person. In this respect, the mate phenomenon is very much like the culture of coffee snobs in the United States. I did bring home my own mate kit, and in fact my gourd is pictured above. (Needless to say, all the supplies to make your own mate are readily available online.) Whether I ever trade my coffee fanaticism for mate remains to be seen, but if I suddenly seem younger and healthier, you’ll know why.

Note: This is an updated version of an article that originally appeared on Interesting Thing of the Day on January 29, 2005.