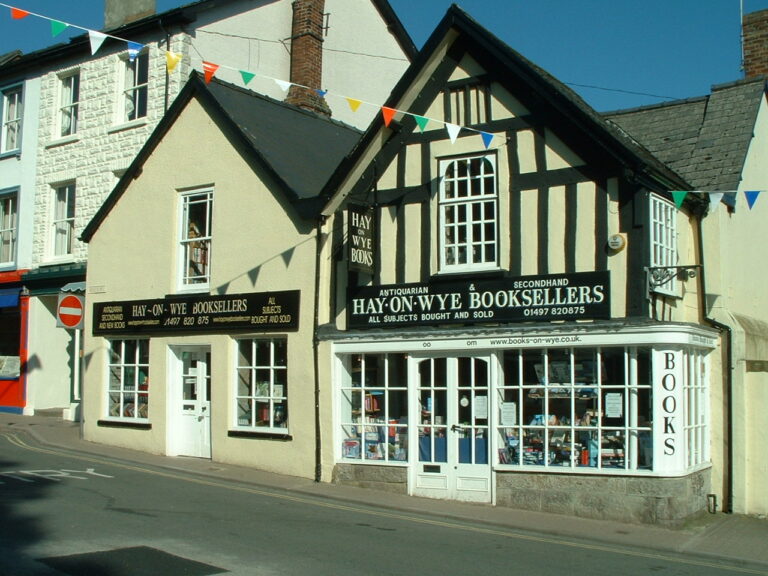 The Town of Books

As anyone who knows me can attest, I am a sucker for books. I’ve had my nose perpetually stuck in a book for as long as I can remember (although nowadays I also do a lot of reading on electronic devices), and my house is stuffed full of books. I’m rarely tempted to spend serious money on clothes or jewelry, but I’m perpetually tempted whenever I step into a bookstore, and it takes great discipline not to buy every book I see. Thus it gives me great joy to think about a locale where my bibliomania would not seem out of place: the Welsh town of Hay-on-Wye, home to 1500 inhabitants and millions of books.

Hay-on-Wye, also known by its Welsh name Y Gelli (“The Grove”), lies on the border between Wales and England, and is about halfway between the English cities of Bristol and Birmingham. Its English name is derived from the Norman word for an enclosed field (“hay” or “haie”) and from its setting on the banks of the River Wye.

Earlier on in its thousand-year history, the town was the scene of immense political upheaval owing to its strategic location between Wales and England. The history of the castle at its center illustrates how tumultuous those times were. Built in 1200 CE by the local ruler, William de Breos II, Hay Castle replaced an older, smaller castle. After displeasing King John of England, William was forced to flee to France in 1211, and his wife and son were imprisoned.

In 1231, the castle was burned by a Welsh prince, but was rebuilt by Henry III around 1233 and returned to the control of the Breos family. The Earl of Leicester, Simon de Montfort, attacked the castle in 1265 in response to local opposition to the king. In 1322, the English king Edward II again captured the castle from its rulers at the time. And during the Welsh rebellion of the late 14th century, led by nationalist leader Owain Glyndŵr, the castle was nearly destroyed by fire.

The castle had various owners over the following centuries, including the local church, which used it as a vicar’s residence during the Victorian era. In 1971, a resident of Hay-on-Wye, Richard Booth, purchased the property and created a bookstore within its walls.

Creating a bookstore was nothing new to Richard Booth, who first began selling books in Hay-on-Wye in 1961. Convinced that the presence of many bookstores in the town would draw in tourists and gain attention for Hay, he converted an old cinema into the Cinema Bookshop, and encouraged other businesspeople to open stores as well. He eventually sold the Cinema Bookshop, and opened Richard Booth’s Bookshop in the old town firehouse, which has become a local institution since then, although Booth sold this store in 2005 and opened yet another bookstore.

With the example set by Richard Booth, many other secondhand and antiquarian booksellers made their home base in Hay-on-Wye, and by the end of the 1970s, the town became the world’s first “book town” with an estimated one million books in stock. The book town concept has since spread to many other countries, and although the number of bookstores in Hay-on-Wye has recently declined slightly, there are still a mind-boggling number of stores for such a small town. According to the town’s official website, there are now 19 bookstores (some of which encompass multiple bookselling businesses) serving a population of 1500, which is an incredible ratio of residents to book shops. But because Richard Booth’s vision of the town as an international center of bookselling has been realized, locals now share these stores with the approximately 500,000 visitors it receives each year.

The highest concentration of visitors descends on the town during the last few weeks of May for an event that has become world renowned: The Hay Festival. Launched in 1988 by Peter Florence and now attracting thousands of attendees annually (273,000 tickets were sold in 2018), this literary festival has drawn famous writers such as Margaret Atwood, Kazuo Ishiguro, Julian Barnes, John Updike, and Don DeLillo, among many others, to give readings and conduct book signings for the assembled crowd. The festival has become so popular that it has spawned sister festivals around the world, and has inspired HowTheLightGetsIn, a music and philosophy festival that runs concurrently with a portion of the Hay Festival.

It’s not surprising that a town full of books has become the setting for a major literary festival; it holds out the promise of a physical location for something that usually only exists in the mind: a community of those who love the written word. I count myself in that number, and hope some day to have that same experience, whether in a small Welsh town or in another place where readers and writers gather to celebrate the joy of books.

Note: This is an updated version of an article that originally appeared on Interesting Thing of the Day on November 11, 2006.