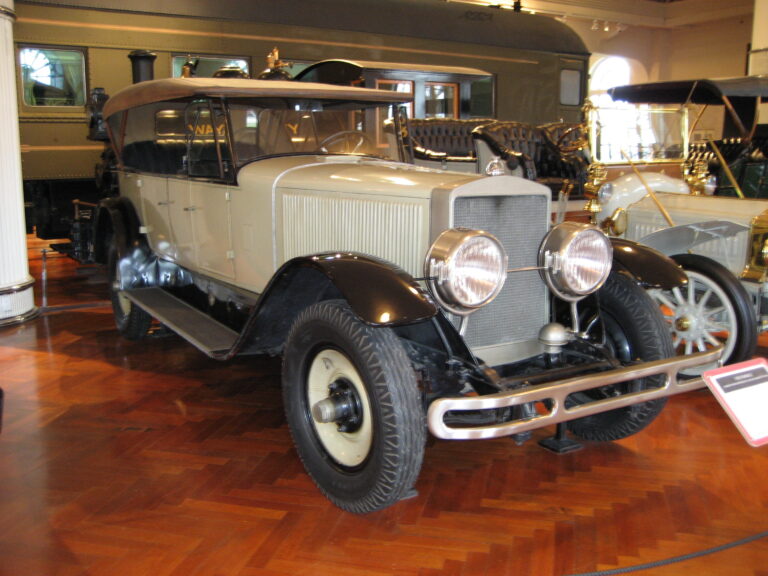 My current car is a hybrid, and if current trends continue, I imagine any future cars I buy will be fully electric. But a century ago, I might have been tempted by one of the last steam-powered cars…at least, if I’d been extremely wealthy. I’m speaking of Doble steam cars, designed and manufactured by Abner Doble and his three brothers. On the plus side, they required very little maintenance, accelerated rapidly, handled smoothly, had low emissions, and were virtually silent. On the minus side…pretty much everything else.

In the early years of the 20th century, some cars were powered by steam engines, based on the same tried-and-true technology that had already powered locomotives for a long time. The newfangled internal combustion engines rapidly stole the show, though. Unlike steam engines, which sometimes took as long as a half hour to heat up before the car could even move, internal combustion engines started immediately. They didn’t require the driver to stop every hundred miles to refill a water tank, and they generally had fewer mechanical problems. By around 1910, the only major steam-powered car still in production was the Stanley Steamer—and its days were numbered. The battle had been decided.

Not everyone was convinced, though. Abner Doble was a San Francisco native who had moved to Massachusetts in 1910 to attend M.I.T. He dropped out after just one semester and, along with his three brothers, began working on improving the design of steam engines for cars. Doble’s first major innovation was extending the steam car’s range. All existing steam-powered cars lost a lot of water and had to be refilled frequently. Doble made innovative changes to the condenser system that recirculated water; in so doing he increased the car’s range to as much as 1500 miles (2400km) with a full 24-gallon (91-liter) water tank. (Of course, that was only the distance it could travel without a water refill. It used kerosene to heat the water, and the fuel mileage per gallon was not great, but it was still similar to that of conventional cars of that era.)

After building a couple of prototype vehicles, the Doble brothers moved to Detroit in 1915, where they set up shop as the General Engineering Company to design and build steam-powered cars. Doble’s next challenge was to solve the long start-up problem. He did this by using a flash-steam generator rather than heating a huge tank of water, and adding ignition and carburetor systems similar to those used by internal combustion engines. With these improvements, his car could start in as little as 30 seconds. This design also had the side-effect of reducing leaks and making the steam engine safer. The Dobles began advertising their car—the Doble Series C, also known as the Doble-Detroit—long before they’d worked out the rest of the design and manufacturing issues. Although the Doble-Detroit got a lot of press and generated thousands of orders, very few were built. (Some sources say only 11 were manufactured, others as many as 80—but in any case, it was just a handful.) Doble blamed his company’s failure to produce cars on steel shortages caused by World War I, but ongoing engineering difficulties were the real problem. By 1918, the Detroit operation had shut down.

In 1921, after the death of John Doble, Abner and his two remaining brothers moved back to California to give the car business another go, this time as Doble Steam Motors. They solved most of the outstanding engineering problems and added several more innovations, increasing the car’s acceleration and improving its reliability. Unlike other steam cars—and most internal-combustion-engine cars—their new Series E car could start almost instantly even in freezing weather, and could go from 0 to 75 miles per hour (120kph) in a respectable 10 seconds. Because steam engines produce a great deal of torque at almost any speed, the car required no transmission, clutch, or gear shifting. And because the kerosene fuel was burned at very high temperatures but low pressure, almost all the waste carbon was consumed, while certain other common pollutants were never generated in the first place.

And yet, for all those innovations, Doble cars were still hindered by two major problems. First was the price: the chassis alone cost $9,500; add the body, and the price nearly doubled. In the 1920s, that sort of price made the car a luxury item that only the extremely wealthy could afford. The other problem was Abner Doble himself: he was such a perfectionist that he was seldom willing to stop tinkering and tweaking and actually release an automobile for sale.

The first Doble Series E was sold in 1924, and Doble Steam Motors continued to manufacture steam-powered cars—very slowly—for the next seven years. The total number produced before the company went out of business in 1931 has been reported variously as 24, 42, or 43. A few of those cars are still on the road, having racked up hundreds of thousands of miles. But despite the cars’ reliability, Doble simply couldn’t compete against the cheaper mass-produced internal-combustion-engine cars.

Today most people think of the steam engine (an external combustion engine) as a quaint artifact of history, but every few years or so, someone tries to come up with a new spin on using steam to power cars. Given current trends, I have little hope of seeing a practical, fuel-efficient steam car in the future. But I have to admire the Doble brothers’ dedication to overcoming engineering problems and making the best steam car they could given the technology of the time and the resources at hand.

Note: This is an updated version of an article that originally appeared on Interesting Thing of the Day on September 1, 2006.